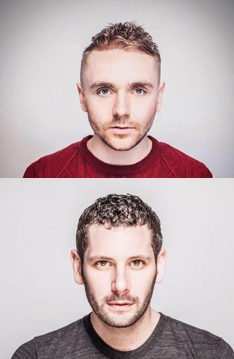 Eyre and Ely are a young BAFTA/OSCAR accredited writer/director team who have together made 3 feature films (distributed by TLA Releasing), 4 critically acclaimed short films and a theatre musical. Lloyd Eyre-Morgan trained at UCLA Film School and his movies have received showings at Picturehouse Cinemas London and Cineworlds. Neil Ely is a Manchester based Writer/Director. Since 2015, Neil and Lloyd have joined together as a successful writer/director team – Eyre and Ely. In 2018 they adapted their BAFTA Accredited Short Film CLOSETS into a sell out stage musical gaining 4 and 5 star reviews at Hope Mill Theatre, Manchester.

They have previously had a feature film in development with SC Films, and currently are developing a new British Horror film KILL PILL with Island Films, which they co-wrote and are set to co-direct together. They recently participated in a development writersroom for a new TV Series with Nevison, and they are developing a live action children’s series with Infinite Wisdom Studios. They are currently developing several new television and feature ideas.

In 2020 they completed a coming of age short film S.A.M, which explores acceptance and how people living with a learning disability can feel about love and sexuality. It stars HOLLYOAKS actor David Tag, ACKLEY BRIDGE’s Sam Retford and Mencap ambassador George Webster, with support from Mencap. They are currently developing a feature length version with Island Films.