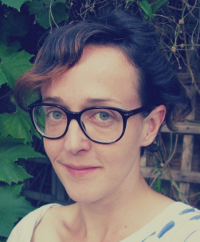 Sarah is a comedy writer, performer, and award-winning author of children’s books. In 2012 she won the Funny Women Comedy Writing Award for her script THE SLUSH PILE, and she was the recipient of the BAFTA/Rocliffe New Writing Forum. She is a graduate of the Royal Court Young Writers Programme.

Sarah wrote multiple episodes across two series of teen mystery drama EVERMOOR for Lime Pictures/Disney, plus wrote on teen musical drama THE LODGE Series 2 for Zodiak Kids/Disney. Other recent commissions include a co-written live action children’s comedy pilot for Lime Pictures, and THE WORST WITCH Series 3 for CBBC. She is currently writing on a new animated series for Sun Creature Studios and Cartoon Network

She is also the author of more than 20 children’s books. The first book in her comedy adventure series, Buckle and Squash, (Macmillan) won the Sainsbury’s Book Award, and has been shortlisted for the Sheffield Children’s Book Prize and Coventry Inspiration Book Award. She is also writing a new series of Wombles books for Bloomsbury.

Sarah was the winner of the BAFTA Rocliffe New Writing Forum in 2012 for her sitcom script, THE SLUSH PILE, which was given a rehearsed reading at the New York Television Festival and developed by Objective Productions. She also worked with Objective developing a sitcom script, CAMELOT, and a comedy pilot, BAD THERAPIST, which she co-wrote with comedienne Susan Calman. She has also worked on NITWIT, a children’s comedy, with Citrus TV.

Sarah’s short stories for adults have been published in various magazines, and broadcast on Radio 4. She also works as an illustrator and freelance editor. Her work as an author is represented by Catherine Clarke at Felicity Bryan Associates.