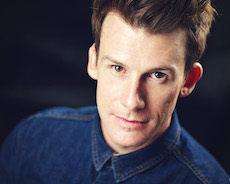 Peter is an exciting, up-and-coming Welsh writer and theatre director.

His play 5 GUYS CHILLIN’ was named one of “Ten Plays That Shaped Queer Theatre History” in the Evening Standard. It won Best LGBT Play at the Edinburgh Fringe Festival, as well as previously winning a Brighton Fringe Award for LGBTQ Theatre and 2 Dublin International Gay Theatre festival awards, and won the Boyz Scene Award for Best London Play. It had a combined run of 6 months at the Kings Head Theatre in London and transferred Off Broadway to SoHo Playhouse. It has since been published by Oberon Books, and licensed in Australia and Canada and translated into Czech, Hebrew, and French for a run in Paris in 2019. He is currently developing a film adaptation and has recently been awarded funding from the BFI and Ffilm Cymru to write the script. Peter also has a project under option to Fulwell 73.

Peter directed Sasha Ellen’s SIGNAL FAILURE for a 6-week run at Soho Playhouse-Off Broadway, KINDNESS for BBC Radio 4 (The Independent’s Pick of the Week) and FRANK SENT ME which ran at Soho Theatre, The Underbelly and Theatre 503. Most recently he has directed KOMPROMAT by David Thame for the Vault Festival 2019.

Peter holds an MA in Theatre Directing from St Mary’s University College, and previously trained as an actor at Royal Welsh College of Music and Drama, and was recipient of the prestigious BBC Carleton Hobbs Award.

Most recently Peter was selected for this year’s BFI Network X BAFTA Crew and became an Associate Artist of the King’s Head Theatre.

A staged reading of his new play A TIDY BOY is being produced this Autumn in Neath, Cardiff and London, with support from Arts Council Wales, the National Lottery and the Welsh Government.